Collectors Flock to Handbags With Bling – Dilrose Skip to content

Collectors Flock to Handbags With Bling

June 19, 2018
A Matte White Himalaya Niloticus Crocodile Diamond Birkin 30 with 18K white gold and diamond hardware from Hermes, 2008, will be sold at Christie's in London on June 12. The estimate is £100,000 (US$133,500). ILLUSTRATION: COURTESY OF CHRISTIES IMAGES (2018)
The hottest handbags among collectors worldwide are made by the French luxury fashion house Hermès and are adorned with fancy hardware, the clasps and buckles that make these handmade bags worth tens of thousands of U.S. dollars.

Earlier this week in Hong Kong Christie’s sold all of its so-called “exceptional” Hermès hardware handbags, which specialist Rachel Koffsky said was highly unusual. The top lot of the Wednesday sale, which raised HK$43.2 million (US$5.5 million) was a So Black Matte Birkin 30 bag, made from Niloticus (or Nile) crocodile, and created by John Paul Gaultier for Hermès fall/winter collection in 2010.

The bag, which was only made in matte, crocodile and “box calf” leather, has black hardware coated with PVD-plating, which, it turns out, easily chips, causing Hermès to pull the bag from distribution soon after it was produced. But that of course only made collectors hungry for Hermès more attracted to these suddenly scarce Birkin bags. Christie’s estimated the So Black Matte Birkin would sell for at least US$50,000, but after extended bidding with a global range of potential buyers, it sold for US$176,116, to an anonymous bidder. 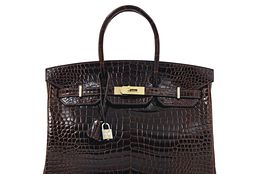 “This is the type of piece that when you see it at auction, collectors are going to go above and beyond the estimate because they don’t know when it will come up at auction again,” Koffsky says.

Hermès bags of all types dominate live auctions, representing about 90% of sales. That’s because the luxury firm has “been creating handbags in the same way for 100 years,” incorporating the same saddle stitch Hermès used to create harnesses and saddles, she says. While fashion-oriented brands also make bags by hand now, “the quality and quantity of pieces on the market by Hermès just outnumbers any other brand,” Koffsky says.

Buyers also went crazy for another Birkin bag in Hong Kong, a Shiny Améthyste Porosus (or marine) Crocodile Diamond Birkin 35 with 18K white gold and diamond hardware. The 2010 bag sold for US$160,105, shooting far above its US$11,250 estimate.

On June 12 in London, Christie’s will have another 220 lots of handbags for sale in an auction estimated to fetch more than US$2 million, including eight bags with “exceptional” hardware.

There’s a Shiny Verte Foncé Porosus Crocodile Diamond Birkin 35 featuring 18K yellow gold and diamond hardware, which is unusual since most of Hermès gold hardware is white, Koffsky says. The 2010 bag is estimated to sell for at least £60,000 (US$80,000). Another Porosus crocodile Birkin 35 bag is made with 18K white gold and yellow sapphire hardware, “which is the sort of piece you see once in a lifetime on offer,” Koffsky says. The estimate for this bag, made in 2010, is also £60,000.

But the top lot for the London sale is a 2008 Matte White Himalaya Niloticus Crocodile Diamond Birkin 30 with 18K white gold and diamond hardware that’s estimated to sell for at least £100,000 (US$133,500). The bag carries a grade of 2 on a scale of 1-6, with 1 representing an "as new" bag and 2 meaning a bag in “excellent to pristine” condition, according to Christie's.

While Asia is the most mature market for handbags, Christie’s, with US$18 million in handbag sales last year, is finding customers across the globe. At the Hong Kong sale, “I was listening to the auctioneer calling out the names of the cities where people were bidding,” Koffsky recalls. “It was Canada, then it was Qatar, then it was Japan, then Thailand, then the U.S.—it’s really such a variety.”