Queen of recycling! How the monarch has been re-wearing her favourite – Dilrose Skip to content

Queen of recycling! How the monarch has been re-wearing her favourite accessories

Queen of recycling! How the monarch has been re-wearing her favourite accessories such as headscarves for decades - including the same handbag for almost 50 YEARS

The Queen has been reusing her favourite bags, shoes and accessories for over half a century, MailOnline can reveal.

The 92-year-old monarch entrusts a select few suppliers with making her clothes, some of whom she has been visiting for more than 70 years.

Her busy schedule of public duties often demands several outfit changes a day, which means gloves and shoes must be made from the highest quality materials.

Among her hardest-working pieces is a patent handbag from British label Launer, a piece she has been wearing for nearly 50 years.

Scroll down for video 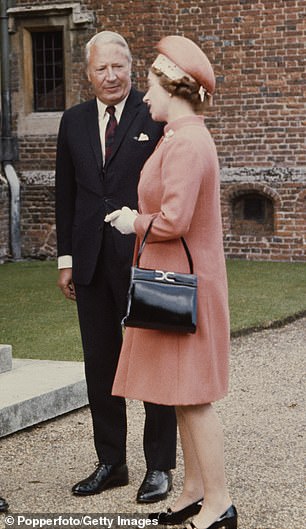 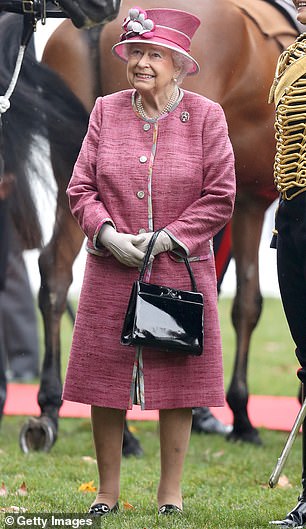 Seeing double! The Queen with her trusty Launer handbag which she has owned for almost 50  years, seen with then Prime Minister Edward Heath during a visit from President Nixon at Chequers in 1970 (left) and reviewing the King's Troop Royal Horse Artillery in 2017 (right)

The Queen reviews The King's Troop Royal Horse A…

Queen is radient on visits Royal Horse Artillery at Wo…

Spotted on her arm for the first time in 1970, during a meeting with President Nixon at Chequers, the monarch was seen wearing it again in 2017 while reviewing the King's Troop Royal Horse Artillery.

Known for its iconic 'twisted rope' emblem, Launer was established in 1941 and awarded a Royal Warrant after supplying with Queen with leather good since 1968.

Similarly, the Queen, who is famed for her love of silk headscarves - her collection is thought to be in the hundreds - wore the same vibrant green number while riding in Sandringham in 1970, and on her 79th birthday at Windsor in 2005 - some 35 years later.

Another piece that has stood the test of time is her trusty green gilet - of which she has a vast collection - worn for off-duty appearances.

Timeless classic: The Queen wore the same vibrant green headscarf while riding in Sandringham in 1970 (left), and on her 79th birthday at Windsor in 2005 (right)

This blue rain coat, believed to be from British brand Musto, has made at least two appearances at the Windsor Horse Show in Berkshire, first in 1993 (left) then in 2003 (right)

The quilted paisley number has made not one but two appearances at the Windsor Horse Show over the years - in 2002 and 2012 - both paired with her trademark silk headscarf, tweed skirt and sturdy boots.

When it comes to gloves - a staple of any monarch's wardrobe - the Queen has been using Cornelia James for a staggering 72 years.

Her long-standing relationship with the East Sussex supplier began in 1947, when her wedding dress designer Norman Hartnell ordered a pair of plain white cotton gloves for her going-away outfit.

Déja vu: Another piece that has stood the test of time is the Queen's trusty green gilet. The quilted paisley number has made not one but two appearances at the Windsor Horse Show over the years - in 2002 (left) and 2012 (right) - paired with her trademark silk headscarf 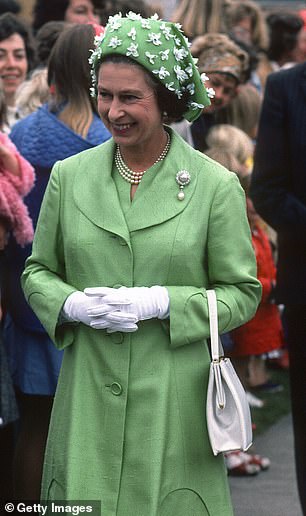 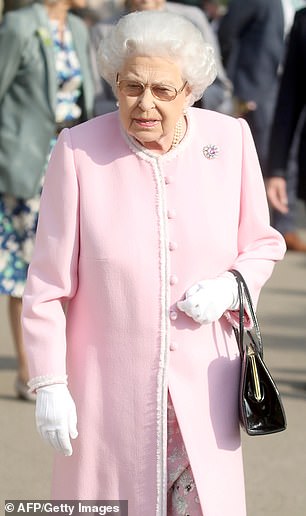 When it comes to gloves, the Queen has been using Cornelia James for a staggering 72 years and is known to repair and reuse instead of replacing damaged pairs (pictured wearing the same style in New Zealand, 1977, left and London, 2018, right)

The Queen, pictured visiting the children's charity Coram in London last week, has been wearing shoes from Anello & Davide for around 50 years. Left: Her Majesty in another pair from the same brand on a visit to RAF Benson in Oxford in 1984

Royal glovemaker Genevieve Lawson has previously revealed that Her Majesty tries to extend the quality of her gloves by reusing them and sending them back for repairs instead of buying new ones.

The Queen has also worn the same style of shoe for the past 50 years, handmade for her by Anello & Davide of Kensington, west London, from the finest calf leather - usually in black patent with a brass clasp or a small bow.

She has worked her way through hundreds of almost identical pairs over the years but circulates about ten pairs at any one time — including plain black leather, black patent, white leather and beige leather, and three designs of evening shoe in satin, silver and gold.