PITY THE MEN’S DRESS SHOE, once an inescapable sight in Milan. Whether we’re talking about pointy-toed Ferragamo loafers or hand-painted brogues from an artisan outside of town whose workshop’s location a Milanese gent would guard as closely as his grandmother’s bolognese recipe, formal men’s shoes used to rule the streets—but no longer. Along the cobblestone corridors of Italy’s second-largest city, sneakers now abound, from the simple (Adidas Stan Smiths) to the sublime (rare Nike s) to the ridiculous (the pervasive Triple S “ugly sneaker” from Balenciaga). Mirroring the city’s embrace of rubber soles, designer sneakers held court on the runways this past week during the 60th edition of Milan Men’s Fashion Week.

Ermenegildo Zegna set the tone on the opening evening: 40 of the 48 models in its runway show wore sneakers, in particular a mesh-paneled design reminiscent of rock climbing shoes. An outdoorsy spirit was also present in Prada’s low-profile trainers which channeled Nike’s ’70s waffle soles—a fitting throwback for a fashion show held on Father’s Day. At Dolce & Gabbana, the winky absurdism of the ugly sneaker trend may have finally peaked with the $945 “Super King,” a bulbous shoe atop a platform sole seemingly made of rubberized Lego blocks in Spongebob Squarepants colors. For those who wish to step out of the cartoon frame, the tailoring mavens at Canali proposed a simple low-top sneaker in nubby houndstooth, a fabric the label traditionally reserved for its suits. 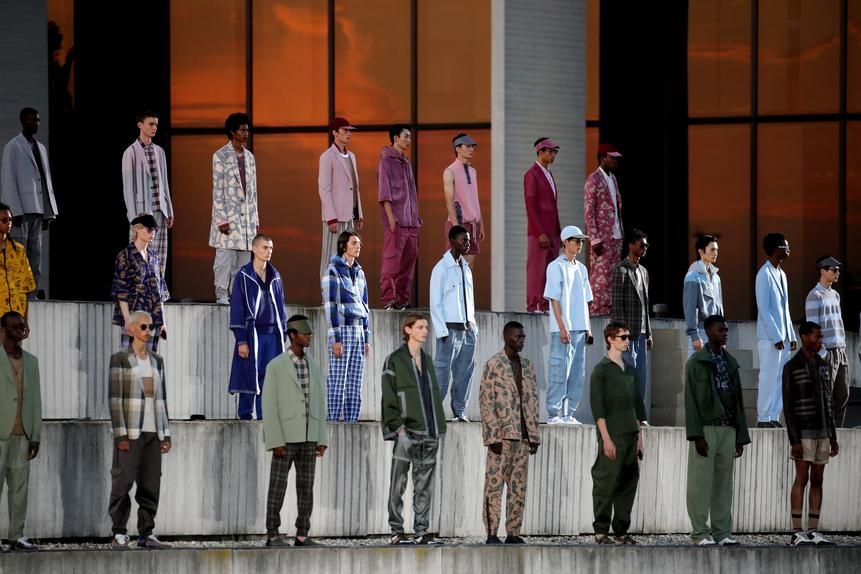 Models at the finale of the Ermegildo Zegna show held in Milan last week. 40 of 48 models in that show wore sneakers as opposed to classic dress shoes. PHOTO: GETTY IMAGES

Lanvin’s patent-leather-toed lace-up debuted in 2005, and is widely considered the patient zero of this current designer-sneaker moment. Some 13 years later, there’s no stopping the spread.

Kiton, the luxury house renowned for cloud-soft cashmere and suits that take 50 hours to make, introduced sneakers only a handful of years ago, but today, they represent 60% of the company’s shoe sales. “Kiton is changing a lot,” said CEO Antonio de Matteis. “If you saw Kiton five years ago, and the proportion of what we are selling [now], we’re another company.” Kiton’s customer has not lost his taste for prestige: One successful sneaker, made from ultra-luxurious sea island cotton, costs nearly $1,000. But apparently even the most well-heeled shoppers just prefer the squish of a sneaker to the clack of a hard-bottomed brogue.

“What we are seeing is that the way men are buying casual shoes is shifting,” said Justin Berkowitz, the men’s fashion director at Bloomingdale’s. “Where they maybe would have bought a driving [moccasin] in the past, they’re buying a sneaker.”

Designers in Milan this past week appeared keenly aware of customer demand for athletic-ish sneakers. But while brazenly loud sneakers are still a clear trend, many brands are tempering this Instagram-happy look with more subdued silhouettes. 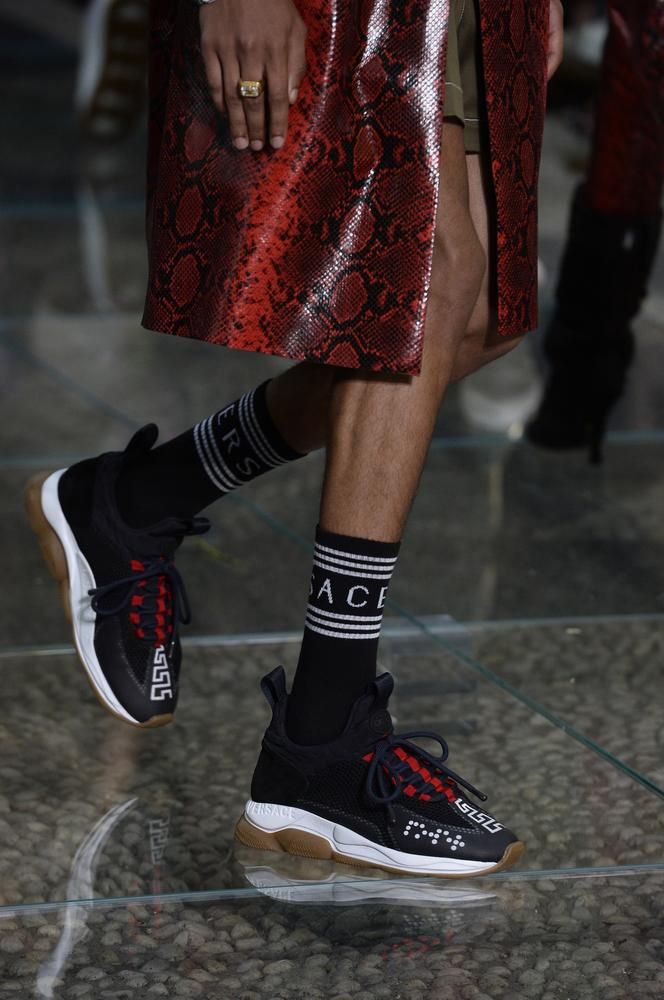 Last week in Milan, Versace introduced a streamlined iteration of their popular “Chain Reaction” sneaker to appeal to customers looking for a little less flash on their feet.

Salehe Bembury joined Versace as sneaker designer just eight months ago and immediately went to work producing the Chain Reaction—a low-top lace-up with animal-print accents and a club-sandwich-sized sole. The shoe was a smash among a certain cadre of spotlight-seeking men. “You need a polarizing silhouette to grab attention,” explained Mr. Bembury. The Miami Heat’s Dwyane Wade and rapper Offset of Migos were paparazzied wearing Chain Reactions, and the shoes sold out instantaneously online. That said, even Mr. Bembury acknowledged that the shoes were not exactly appealing for a man who is used to wearing low-key Stan Smiths. “It’s a scary shoe,” he admitted. And so, in an attempt to bring more fans into Versace’s gilded arms, this season he introduced a “little brother” version on a slimmed-down sole and in quieter colorways.

“You make the pink shoe to sell the black shoe,” said Mr. Bembury, referring to a tried-and-true sneaker-design strategy. And hey, if you get lucky, you might just sell that pink shoe too.