Slip into the best footwear style.

A country house shoe for the landed gentry, or a Norwegian farmer’s favoured style of footwear? Whatever you consider to be the true origins of the contemporary loafer, what’s indisputable is this timeless silhouette’s skillful blend of comfort and flair.

Unlike the holy footwear trinity of brogues, Derbies and Oxfords – all elegant, but a bit samey – loafers are often written off as flamboyantly ‘dandy’ or too difficult to pull off with a wide range of outfits.

In truth, these slip-on styles are anything but. Being laceless, they’re practical, and with plenty of options on offer – from traditional penny versions to luxuriously finished horsebit loafers – there’s something to suit every taste. Here’s what you need to know.

Before delving into the types of loafer up for consideration, it’s worth heeding a few memos on the importance of material. Like other smart shoes, loafers are generally made using one of two fabrics: leather or suede, which both have their own strengths and weaknesses.

With their sleek and gleaming finish, leather loafers make the perfect punctuation mark for smarter looks, whether that’s a full suit or smart-casual tailored separates. Although you’ll want to be sure to keep them in good nick (taking care to clean and polish regularly), loafers made from leather are markedly sturdier than those crafted from suede and will also wear well over the years, developing a unique patina in the process.

Suede, on the other hand, should – if you have any respect at all for footwear – be exclusively reserved for the spring/summer months. Their luxurious but delicate finish means suede loafers should be protected from excessive moisture at all costs.

Suede designs also have a slightly more casual feel (though that’s not to say they can’t wear be worn with tailoring), making them a shoe-in for a warm-weather wardrobe that’s bound to be more relaxed compared than its autumn/winter equivalent. Now, let’s look at the key styles.

Irrepressibly smart, the penny loafer is the preppy footwear classic that still takes pride of place on shoe racks today, almost a century on from its invention.

Despite its connotations of US political heavyweights and film icons, penny loafers were originally conceived in Norway. Native Norwegian Nils Gregoriussen Tveranger spent his adolescence carefully studying the craft of shoemaking in America, eventually returning home to create the ‘Aurland moccasin’, a style of loafer reportedly inspired by the indigenous Iroquois.

In 1934 – prompted by Tveranger’s distinctive design – G.H. Bass & Co, a bootmaker in Wilton, Maine, released an adaptation of the Aurland. This new version, dubbed the ‘Weejun’ (sounding like Norwegian), featured a strip of leather across the front with a diamond cut-out detail – which, incidentally, doubled up as the ideal compartment for stashing a dime.

“The beauty of the penny loafer is its versatility; the shoe can be dressed up or down easily and works with most outfits,” says Gilad Yogev, creative director of G.H. Bass & Co. “Our Weejuns have been adopted by many subcultures and trends throughout the years.”

While it’s true pennies will work for smarter attire like summer suiting, they’re best used to add polish to casual or smart-casual looks. Think a varsity jacket, T-shirt and chinos, or an Oxford shirt, jumper and tailored shorts. Although ‘tasselled loafer’ may to some ears say ‘yuppie’, the style first came about thanks, not to an white-collar dickhead, but a man by the name of Paul Lukas.

Lukas, an Oscar-winning Hungarian-born actor who starred in films including The Lady Vanishes (1938) and Watch on the Rhine (1943), was well known for his debonair style. As the story goes, at some point during the 1940s Lukas approached several shoemakers, instructing them to design a shoe that riffed on a tasselled Oxford style he’d picked up in Europe.

Low and behold, in 1950, one of America’s then-leading shoemakers, the Alden Shoe Company, released the first tasselled loafer, with initial batches flying off the shelves by 1952. A few years later, in 1957, high society outfitters Brooks Brothers started stocking their stores with an exclusive tasselled style featuring distinctive foxing (raised stitching) at the back of the shoe.

Today, arguably the best-known tassel model is the cordovan. Unlike most formal leather shoes – which are made from calfskin – cordovan loafers are crafted using the subcutaneous layer of a horse’s rump. Durable and lustrous, cordovan is also the least porous of leathers, and so highly sought after – which goes some way in explaining why you’ll need to cough up almost £550 for a pair by Brooks Brothers. With bluer blood than its brother styles, the horsebit loafer is the definitive dress loafer.

Equipped with a brass strap in the shape of a horse’s snaffle, the horsebit takes its cues from equestrian wear – not surprising considering it was probably conversations about polo matches and horse racing that inspired its creation.

In the years following WWI, Gucci founder Guccio Gucci worked as a lift boy at The Savoy hotel in London, serving the city’s elite and carefully noting the nuances of their distinctive style.

Later, on returning to Italy, Gucci combined his experiences of refined style with the company’s saddle-making history, fashioning the first horsebit loafer in 1953 – an iconic shoe that would soon skyrocket the luxury label to stardom.

The design became so iconic, in fact, that Gucci’s horsebit was added to the permanent collection at the Costume Institute at New York’s Metropolitan Museum of Art in the 1960s, and was also the subject of an entire exhibition in 2013 at the Gucci Museo in Florence. Not too shabby for a slip-on.

The horsebit’s central appeal then, as now, is its refinement. Unlike older loafer styles, the horsebit doesn’t look out of place with a formal suit, but completes it instead. There once was a time when only two types of men wore slippers outside of the house: Hugh Hefner and your grandad. And really, what’s the difference?

But in recent years, the shoes previously reserved for millionaire playboys and 19th-century aristocrats (Prince Albert was said to be a huge fan) have taken a more louche route, being worn by style mavericks like Ryan Gosling and Kanye West.

As sharp as they are comfortable, the slip-on design is typified by a sturdy leather sole, slight heel and traditional velvet or suede uppers. In addition to being a sleek alternative to the standard dress shoe, slippers can also be used to elevate slightly more casual outfits, especially when sought out in more contemporary leather or neutral colourways.

Regrettably, this invitation is not extended to the shearling-lined moccasins you received at Christmas. Get caught in those at a black tie event and expect fellow guests to stop nothing short of shipping you, and your geriatric get-up, off to a retirement home. It’s all well and good being able to flex some sartorial muscle and reel off the history of loafers, but incorporating these hard-working, versatile styles into a daily rotation requires a little expert help.

To that end, we tapped Selfridges personal shopper and freelance stylist Daniel Rhone for his dos and don’ts of loafing around.

Celebrated US presidents and famed Hollywood film stars alike have turned to the loafer as something more than a partner to pyjamas. Though, when it comes to tailoring, there is one pertinent rule.

“When wearing a suit with loafers, the most important factor is the length of the trouser leg. The break should be slight […] so that the silhouette appears clean and you can still see the detail of the shoe.” 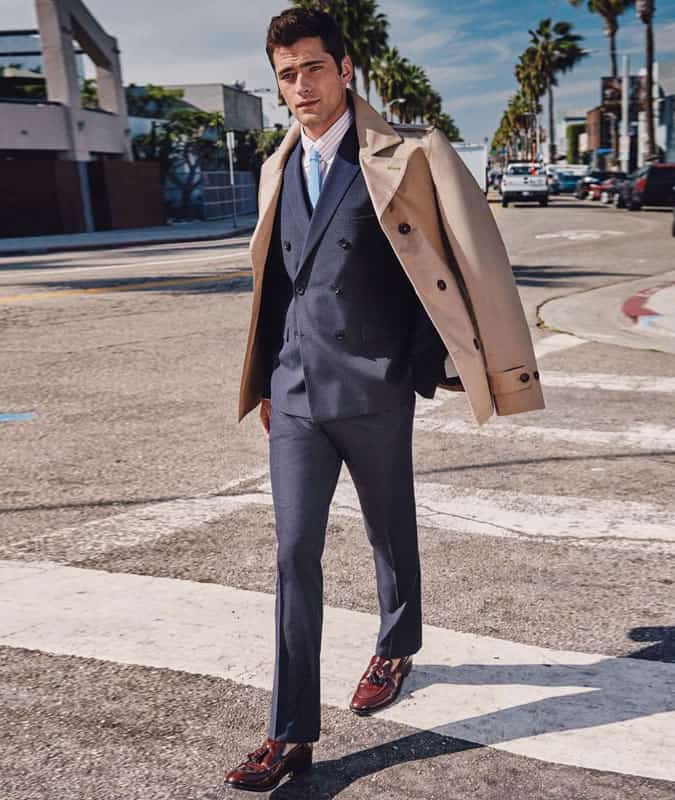 Whether gracing the feet of Ivy League prepsters or Camden Teddy Boys, loafers have been worn by a range of men and subcultures, each with their own unique way of styling.

“For a Mod-inspired take on loafers, look for a slim, tapered trouser or a cropped style that delivers a contemporary edge.” Equal parts practical and natty, it’s little wonder loafers make for the perfect shoe during the warmer months or while on holiday.

“If looking for an understated but effortlessly cool summer look, team a linen shirt with a pair of light-coloured cotton chinos and a pair of suede tassel loafers.” As the heat rises, it makes sense to embrace the cooling benefits of baring your ankles by going sockless. However, that doesn’t mean letting feet fly solo.

“Sock specialist Falke produces a fantastic range of no-show socks. Another tip is to dust your feet with a little talcum powder, so you don’t end up perspiring excessively.”